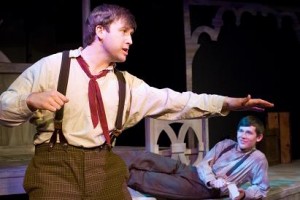 Few literary names are more recognized, and few literary works are more well-loved than those of Mark Twain. But arguably his most fascinating story is not one that he wrote, but the one that he lived.

In Life on the Mississippi, a new musical based on Mark Twain’s autobiographical coming-of-age classic, the young Samuel Clemens leaves home to learn steamboat piloting on a Mississippi riverboat in 1858 and, in the process, finds himself learning about life. And love. And death. And writing. All while navigating his way from boy to man and from Sam Clemens to Mark Twain. 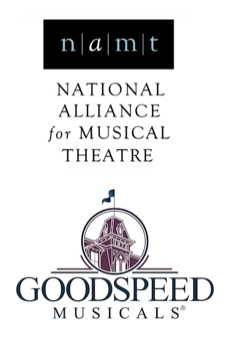 Life on the Mississippi  is the recipient of several prestigious honors and productions.

It has received three industry workshops in New York City, most recently at the off-Broadway York Theatre Company.

In 2008, Life on the Mississippi was named by NAMT (National Alliance for Musical Theatre) as one of their Five Shows You Should Know. In 2009, the musical was selected and presented at the Goodspeed Opera House as one of just three shows in the Festival of New Artists. In January, 2010, the young audience version of Life on the Mississippi was honored with an NEA grant and premiered with a five-week run at the Coterie Theatre – a leading young audience venue in Kansas City – to strong reviews (below). In June, 2010, Life on the Mississippi had its full-length premiere at American Folklore Theatre in Wisconsin, where it had a ten week run, again receiving strong positive reviews (below).

Since then, Life on the Mississippi has gone on to a variety of successful productions across the country.

It is written for adult, college or high-school age performers.

For the score, two sets of arrangements are available, one for piano only and one for piano, violin and cello.

For licensing inquiries or to request a perusal script please email lifemusical@gmail.com. 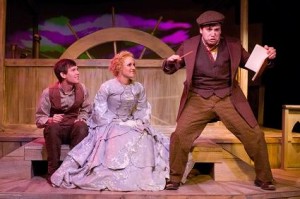 IT’S A WONDERFUL LIFE ON THE MISSISSIPPI

“Life on the Mississippi” is a nicely turned new musical that honors the early life and writing career of the man who called himself Mark Twain. Douglas Parker, who wrote the book and lyrics, and Denver Casado, who wrote the score and arrangements, took the early passages of Twain’s memoir about his life as a steamboat pilot and fashioned an affecting coming-of-age story.”

“Life on the Mississippi is destined to be a hit.”

“Five Stars! Who would not want to climb aboard and find the adventure that awaits?”

“The Coterie has earned its esteemed reputation and once again raised the bar with this world-class production.”

“Parker and Casado have created a bright-eyed, optimistic musical rendition of a young Mark Twain that appealed to my student performers and college audiences. The upbeat music combined with a clever weaving of Twain’s own words provided a joyous entry into Samuel Clemens’ world. The music is eminently singable. My cast loved the experience, learning a lot along the way. The show was one of the high points of our season; a hit with audiences of all ages. The authors provided well-scored music, useful sound effects, and other tools to make my job easier.”

“Parker and Casado infuse a bond between the brothers as well as a romantic rivalry, and build to one of the most moving scenes I’ve seen on stage . . . The show has the feel about it that Henry and young Sam might live on together for a long time outside of this production.”

“Take the kids, take Mom, Pop and the grandparents. This show is for everyone. It’s a ride you’ll be glad you took.”

“Life on the Mississippi has proven to be a delightful, engaging production that travels easily and is well-received by our diverse audiences. The wit and wisdom of Mark Twain resonates throughout the piece and it’s been a hit for our School Outreach Program.”